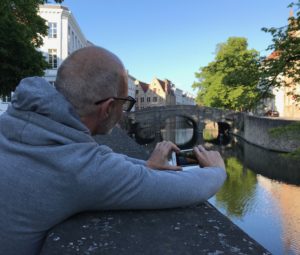 Poggio Di Poggio is a Franco-Belgian artist (b, 1968)
Lives and works in Brussels.

Poggio Di Poggio’s main purpose is to express the spiritual nature of the universe. Inspired by the element water, he explores its fascinating capabilities of transparency, movement and reflection in order to create lights, shadows and depth.

Student of an Italian Master in Rome and a Van der Kelen Academy graduate in Brussels, he has been trained as a decorative painter for 3 years before travelling around the world to create frescoes and trompe l’oeil (marbles, woods or stones imitations) in private homes and public places.

After 10 years of practice as an artisan decorative painter he gradually became a full artist painter, working on academic canvas. He exhibited in New York, Paris and Casablanca in the 2000s.

At the age of 40 he abruptly abandoned creation to devote his life to buddhism. After 8 years of monastic life, travels in Japan and South East Asia, including a 10 months retreat as a hermit in a Thai forest, he understood that he had to return to Europe and pursue his life as an artist with the aim to express the spiritual nature of the universe.

Very concerned by the effects of the climate change on water (global warming, pollutions) he actually works on a series about the melting of polar ice and the glaciers.